| HOW GOD PROTECTED 50 CHRISTIANS BY A SANDSTORM

A massive sandstorm protected a group of newly baptized Christians as Islamist militants pursued them, according to the Bibles for Mideast Organization.

About 50 Christians in the Middle East, returning from a baptismal service, are said to have witnessed divine protection from the LORD JESUS CHRIST as a sandstorm arose, protecting them from a group of extremist Islamists who were chasing them by shooting them.

“About 50 people, including baptism candidates [Editor’s note: 24 former Islamists] attended the service. After the baptismal and prayer service, we all took the same bus back to our house church to participate in the Lord’s worship and sacrament. The bus was moving when suddenly, three cars – or more – of militants arrived behind us and they started shooting at us with guns,” testifies Rizwan, a newly baptized.

While the baptismal service had been kept secret, Bibles for Mideast volunteers cannot explain how Islamist activists learned of it.

A witness continues the story of their adventure, “Really, we didn’t know what to do, so we began to pray to the Lord for His divine protection. The young driver was driving the bus faster and faster and the activists were following us at the same speed. Some thought we were all going to die there. Suddenly we saw a giant sandstorm forming behind our bus.”

At first, we were all afraid of seeing the sandstorm. But, praise the Lord, we all felt that the Lord Jesus Christ was in the storm. Jesus saved us. He Himself blocked the route of the militants in the form of a sandstorm. We heard gunshots again but never saw the vehicles chasing us again. Once again, we praise and thank our Lord Jesus Christ for showing His love and concern for His people. Thank You and praise to the Lord.”

Let us thank the Lord for His divine protection over us His children, wherever we are in the world and whatever difficulties we go through, God is alive. He watches over us. It’s the truth! In difficulty, He listens to us and comes to our aid if we ask Him for deliverance. The Bible is full of promises in this direction.

Philippians 4:6 Be careful for nothing; but in everything by prayer and supplication with thanksgiving let your requests be made known to God.

Hebrews 13:5 Let your conversation be without covetousness and be content with such things as you have: for He has said, I will never leave you, nor forsake you.

Psalms 121:1 I will lift up my eyes to the hills, from where comes my help. 2 My help comes from the LORD, which made heaven and earth. 3 He will not suffer your foot to be moved: He that keeps you will not slumber. 4 Behold, He that keeps Israel shall neither slumber nor sleep. 5 The LORD is your keeper: the LORD is your shade on your right hand. 6 The sun shall not smite you by day, nor the moon by night. 7 The LORD shall preserve you from all evil: He shall preserve your soul. 8 The LORD shall preserve your going out and your coming in from this time forth, and even for evermore.

THE LORD JESUS APPEARED TO THE EXTREMISTS IN THE SANDSTORM

A Muslim extremist who converted to Christianity tells how JESUS appeared to him, as well as the other militants with him, in the dust storm. He had decided, with the other Islamists, to kill all the Christians who had come to a baptismal service but GOD changed their plan.

Haroon (name changed for security reasons) gave his testimony to Bibles for Mideast, an underground organization that works to spread the gospel in the Middle East.

Born into an important Muslim family in the Middle East, Haroon was raised by a father who, as one of the country’s leading religious authorities, was responsible for upholding Sharia law. He explains how, as a trained and sharpshooter, he commanded a militant wing to protect religion and conduct immediate operations against its enemies.

Having had the information a few weeks ago that a group of Christians would meet for a baptismal service in the Arabian Sea, he formed a team of 19 activists to go to the site of the ceremony for the purpose of killing all Christians in the sea while in service.

He explains how, being an Islamist militant, he wanted to create an electric shock so that the world will wake up to the news of the murder, and that Christians would fear the Muslims and stop evangelizing them in their region.

By the time they got to the seashore, however, the group of Christians was already leaving by bus.

The militants then pursued them by shooting the vehicle repeatedly.

In a few seconds, however, a giant sandstorm formed in front of the vehicles of the extremists who could no longer advance. They then got out of the cars continuing to shoot through the dust storm.

Suddenly they saw JESUS appear in the storm, as Haroon explains, “Suddenly we saw JESUS CHRIST appear in the sandstorm. He was angry and His eyes were like a blazing fire. And with a powerful voice, He said to us, “Why are you persecuting Me? It will be difficult for you to fight against the goads.”

Oh, it was a terrible experience! His voice produced a very strong wind and we all fell on the road. Our cannons were flying away from us. Without knowing how, we got up from the road, but we could not speak. We had lost our voices.

JESUS added, “I came into the world, not to destroy you, but to save you! Go in peace!”

Haroon explains, as JESUS disappeared and the dust storm as well, he and the militants with him experienced terrible fear and a great peace at the same time. He says he has never had such an experience in his life before.

Then Haroon and the others regained their voices and began to praise and thank GOD, except two of them, who remained in disbelief.

Upon arriving home, Haroon shared his experience with his father. This one warned him not to talk about it. After this incident, their militant activities were abandoned.

The miracles do not end there, since, following a bite of a poisonous snake, Harija, Haroon’s sister who was dying would be healed by JESUS under extraordinary circumstances. And here’s how:

After the sandstorm (for Haroon) and a dream (for Harija), the brother and sister asked GOD to reveal themselves to them. Then a Christian pastor was told in a dream to visit Harija in the hospital.

He went there and declared to Haroon, “Haroon, as by a dust storm, the Lord JESUS saved me and my group of your arms after the baptismal service at the sea, He also came to us as a wonderful mighty Man showing His beautiful and protective hands with a sweet smile! I was among the people leading the group to be baptized.”

After saying this, Pastor Paul then invited Haroon and his sister to believe in JESUS as their LORD and SAVIOR!

Haroon further relates that he understood that the Lord JESUS CHRIST had appeared before His own people as a Mighty Protector with a gentle smile but also like a blazing fire towards His persecutors.

With his sister, he confessed his sins and accepted JESUS as his Lord and Savior. Pastor Paul then prayed with them and his sister was totally healed!

Haroon’s father, already touched in his mind when his son told him about the dust storm experience, also made the decision to believe in JESUS, after Harija was healed.

All of his family members, as well as the 17 activists, also accepted the Lord JESUS CHRIST as their Savior.

Thank you, Lord Jesus for saving them! AMEN !!! 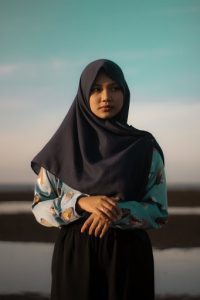