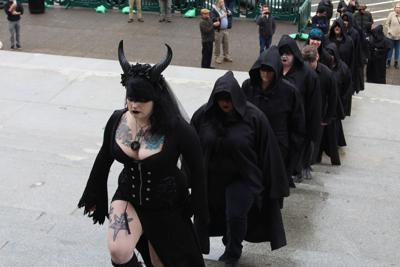 Something very strange is going on in the United States, and the spirits that are hard at work are now bringing forth a power that is designed to captivate the entire world. Shortly after the twin towers of the World Trade Center in New York City fell to the ground and drastically changed our nation forever, a new series of movies began to draw millions of people to the movie theaters. Standing above and apart from the many fantasy movies and books is a trilogy or series of three called The Lord Of The Rings. This series was written by the late J.R.R. Tolkien and was first published in book form in the early 1950s. During the rock music revolution of the 1960s, The Lord of the Rings trilogy caught on, and over 100 million of these books were sold. These books greatly fueled the spiritual revolution and opened the door for witchcraft to seize upon our world. All of this is being done to prepare the way for a new world order in a new Aquarian age.

I was once a witch and was very much a part of the world that J.R.R. Tolkien reveals in his Lord of the Rings trilogy. In the 1960s, I practiced astrology, palmistry, and numerology among other devices of the craft. I was graciously and mercifully saved out of witchcraft by the Lord Jesus, and I am now spending my life in a mission of exposing occultism and its forces of darkness. I am thus writing this message with great urgency, for I can spot witchcraft in a moment, and I recognize it well. I can see that the deceptive cloud of witchcraft has descended upon our nation. Even many Christians are being pulled into the forbidden realm of the occult because they are so ignorant of Satan’s devices.

Before I reveal the dangers of The Lord of the Rings trilogy and expose it as real witchcraft, I will reveal some things regarding the beliefs and doctrines of witchcraft. First of all, witches and Satanists are not the same things. Witches do not believe in Satan. The first thing a neophyte or beginner witch is taught is that there is a “force.” The “force” has two sides and can be controlled by magic spells, words, potions, incantations, rope magic, rings, amulets, and so on. Witches believe that there is good witchcraft and bad witchcraft, and the good always triumphs over evil! Witches also teach that battles are fought in the Middle Earth and in the astral plane causing upheavals both above and below. Thus, witches emphasize that good must triumph over evil, but it is all witchcraft.

I am always amazed when I hear ministries such as Chuck Colson, “Focus on the Family”, and the Assemblies of God defend such works as Harry Potter, The Lord of the Rings, and The Narnia Chronicles. I am amazed because they say the same things that initiated coven witches are saying, which is that good triumphs over evil! It is all witchcraft, and the good that these professing Christians are defending is witchcraft as forbidden in Deuteronomy 18:9-14. As a former witch, I was horrified and outraged to find that “Focus on the Family” was promoting a book as announced in the December 2001 issue of their magazine. The book being promoted is titled, Finding God in the Lord of the Rings. The asking price was 13 dollars.. (The number “13” is the coven number in the occult.) Thus, these so-called “Christian” ministries are making witches their evangelists and using witchcraft materials in their Sunday Schools. Soon they will find their children are in the craft as “good little Christian witches.”

The Lord of the Rings trilogy was the work of John Ronald Reuel Tolkien, who did his writing during the midnight hours. He worked for 12 years and released his story in the 13th year. Tolkien became known as the “Master of the Middle Earth.” This was a land inhabited by hobbits, elves, mortal men, wizards, dwarves, and orcs or grotesque goblins. The hero of the story is a hobbit or halfling only 3 ½ feet tall named Frodo Baggins. Frodo has pointed ears and furry feet and carries a

cursed object with him. The cursed object is a golden ring invested with terrible powers that must be destroyed by casting it into a fiery abyss at a great distance. If Frodo would fail, the ring would fall into the hands of an evil wizard called Sauron, and the entire world would pass into eternal darkness under the dark lord. Sauron’s world is a land of shadows called Mordor. The ring has an inscription on which is written a message in the witchcraft language of runes. We must remember that these runes are real and are used in the occult. As I now reveal the meaning of the runes, please bear in mind that President George W. Bush wears an exact replica of this ring. I have an enlarged picture to prove it. The runes on the ring are interpreted as follows: “One ring to rule them all, one ring to find them, one ring to bring them all and in the darkness bind them.”

J.R.R. Tolkien was born in South Africa where his father, Arthur, managed a bank. When his father died, his mother, Mabel, returned with her children to Birmingham, England, where she converted to Roman Catholicism. J.R.R. Tolkien said, “I desired dragons with a profound desire.” He soon became a prodigy and was speaking German, French, Latin, and flawless classical Greek. In a speech, he would sometimes break out in Gothic, an ancient form of German. He would also speak medieval Welsh and Anglo-Saxon. Tolkien even developed new languages. One of them he called Elvish. He went on to say that the entire story of The Lord of the Rings came to him as a result of the new language that he invented. He was a professor at Oxford University as all of this was happening and as the story of elves, wizards, trolls, and hobbits poured into his mind. While it became a manuscript under his pen, he said, “My work has escaped from my control, I have produced a monster.”

Tolkien, the devout Catholic and “Master of Middle Earth”, converted his colleague C.S. Lewis and spent much time with him at the Oxford pub or tavern. They claimed to have “kindred spirits.”

There is much rank blasphemy in Tolkien’s works, such as the death and resurrection of the wizard Gandalf, who falls into the pit and descends into hell but comes back transformed and stronger than ever. Deceived Christians say that this “good wizard” is a type of Christ! Tolkien even translated the Lord’s Prayer into the Elvish language.

I can say most assuredly that The Lord of the Rings trilogy comes from the pits of hell and is a clever instructional course in witchcraft disguised as fantasy and entertainment. Part one was released in movie form on December 19, 2001, shortly after the two towers of the World Trade Center came down. It was called “The Fellowship of the Ring.” Part two was called “The Two Towers” and was released December 18, 2002. Part three is named “The Return of the King” and was released December 17, 2003, and is breaking all records for ticket sales. All three movies were released at the time of the witchcraft sabbat of Yule!

It is my prayer as a preacher of the true Gospel that Christians will come fully awake. We do not find the saving Gospel in the Middle Earth with wizards, hobbits, and elves. We find the Gospel only in the Bible and through the blood of our Saviour Jesus.

ELBREVIL ELONGA 1 |THE INFLUENCE OF THE 5 WORLDS OF SATAN ON HUMAN SOCIETIES
FAMILIA DE CONFIANZA | SATAN'S ORGANIZATION
EMMANUEL OMOOBAJESU 1 :MY CONVERSATION WITH SATAN: HOW JESUS DEFEATED SATAN AT THE CROSS 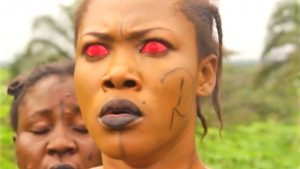